Day 2 of the legal blogging pilot – Attending as a non-practising solicitor, under the umbrella of the Transparency Project 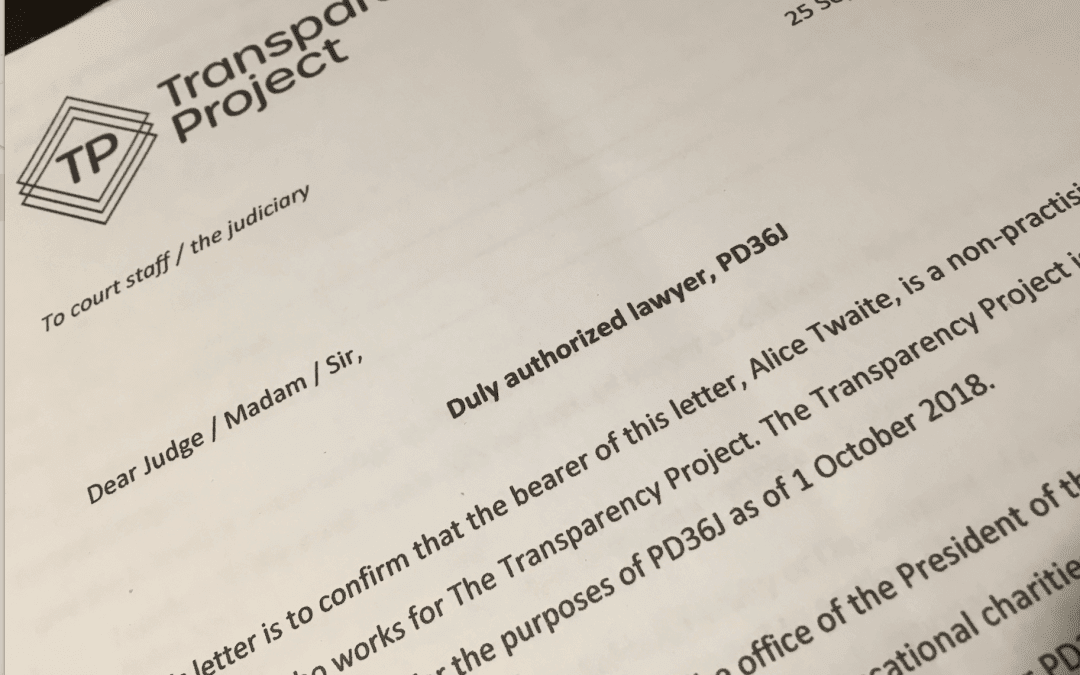 On day two of the new legal blogging pilot I headed to the East London Family Court to check out how easy it would be to take up the new right to (normally) attend (most) family court hearings (just as an accredited journalist can). And to see what challenges it might throw up.

I was going as a qualified but non-practising lawyer, my right to attend being by way of acting under the umbrella of the Transparency Project, themselves accredited as an educational charity by the President of the Family Division. I bore letters of confirmation alongside my photo ID and my FP301 form giving various undertakings to the court, including as to reporting restrictions.

Just like an accredited journalist, whatever I heard, I wasn’t going to be able to publish anything that might identify the child or children (including by identifying the adults) or the detail of the evidence – unless the Judge ordered otherwise.

Without exception the staff at the East London Family Court and Her Honour Judge Atkinson (whose case I targeted), were welcoming and helpful.  Despite security and (some) court office staff not yet seeming to know about the pilot, everyone I came across was open, keen to engage and adapt, and made it an easy (even relatively enjoyable) experience to attend.

Security downstairs did start by patiently explaining that I couldn’t attend as a non-journalist since family court proceedings are private as an exception to the general rule of open justice (which struck me as accurate, concise and well informed save as to the change of the day before). Yet quickly persuaded by my repeated claims of a new practice direction, they waved me upstairs with my pack of papers, to discuss it properly with a more suitable person.

‘Upstairs’ security seemed well aware I was coming and passed me on to the court office where I was promptly helped by a relaxed and attentive court clerk who absorbed the request, listened to why I didn’t in fact need to produce a practising certificate (indeed could not) and went off with my photo ID and pack of papers to ‘liaise’. Within 30 minutes of arriving in the building, I was fully processed and on my way up to find ‘Frank’ the clerk to HHJ Atkinson.

Unprompted, ‘Frank’ was quick to explain some key facts of the case so I could understand it. I had the impression he was well used to doing so with journalists and treated me similarly.  I knew nothing other than that this was an Issues Resolution Hearing within care proceedings because the way cases are listed offers no other clues.  (I’d targeted HHJ Atkinson’s hearing simply on the basis she was a circuit level judge who regularly publishes anonymous judgments and might thus be more open to the prospect of a legal blogger pitching up and wanting to sit in, than say, some magistrates or even District Judges).

I felt an immediate sense of relief at not having to consider the possibility of a family member being worried about a legal blogger being there and duly relaxed about finding and forewarning legal representatives as soon as possible to give them time to reflect and take any instructions. In any event I stumbled on one legal representative, before they all de-camped to a conference room together.  He or the clerk must have spread the word as by the time we were called in, it was plain everyone knew of me, though no one had elected to introduce themselves to me.

Suddenly we were on and I followed behind and sat at the back.  I had a sudden sense from the social workers as we filed in, that the local authority were uncertain about my presence, and mentally prepared my reassurances about the very modest reporting ambitions I held.

HHJ Atkinson herself was clear from the outset that she knew of the pilot, my intended presence under it (under the auspices of the Transparency Project in whom she had confidence) and that I was entirely welcome to attend. She was also careful to clarify the limits of my reporting intentions with respect to the law and its application to the particular case. On this occasion, I was more than happy to confirm my intent to do no more than describe my experience of the process of attending under the pilot and the type of case I had been able to observe.

The general message from HHJ Atkinson was encouraging. In her view the ‘legal blogging’ pilot should be seen as an interesting exercise with everyone needing to get a bit more relaxed about it, and willing to discuss the realities of it on the ground for the particular case; that it was very much a ‘two way street’.

In fact no one objected to my attendance under the pilot. The Local Authority legal representative also made a point of coming to find me after the hearing to acknowledge and explain why he hadn’t introduced himself to me before the hearing and asked if he could be of any help (albeit belatedly) which was appreciated.

Yet by the time I was typing up my blog post that night a growing unease beset me as to just where the proper limits of reporting the evidence lay with respect to the Judge’s remarks on the pilot within the hearing and why I hadn’t thought to check with her at the time. Remembering my undertakings in the FP301 wasn’t helping. Re-reading Kent County Council, Re B (A Child) v the Mother & Ors [2004] EWHC 411 (Fam) (19 March 2004) wasn’t really helping either. Ultimately I decided to email HHJ Atkinson who confirmed (almost by return) that she had absolutely no objection to me reporting the remarks.

It’s certainly left me thinking about how I can avoid that next time. If I don’t know what the case is about, let alone what I’ll want to write about it, until the hearing starts, I’m going to need to pretty much write the report in my head during the hearing so as to seek any permissions or clarifications. Either that or resort to asking the Judge afterwards which feels less than ideal.  It may be that as an organisation we will develop a greater clarity and confidence about interpreting s.12 on the ground over time.