Why I am OK with Dispatches 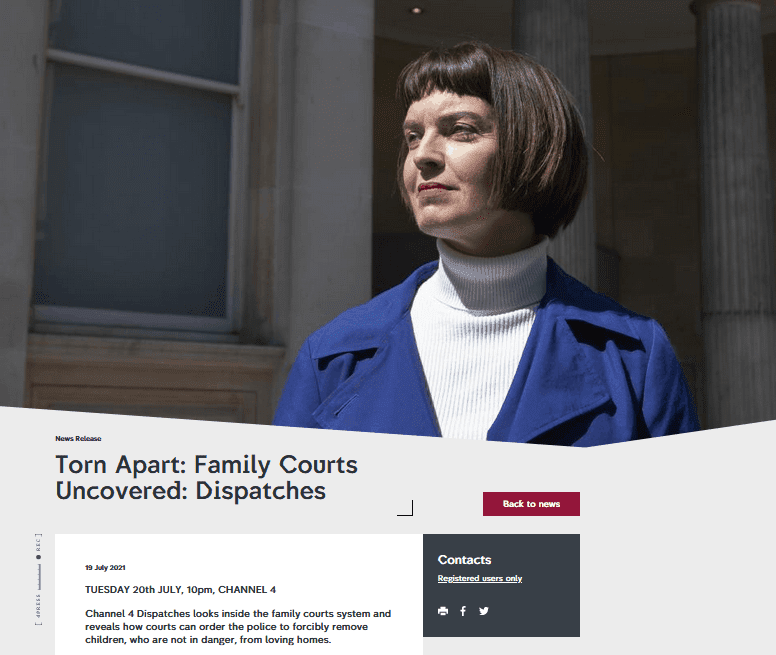 Channel 4 broadcast an episode of its Dispatches documentary series on Tuesday, called Torn Apart: Family Courts Uncovered, presented by Louise Tickle, above. Responses to it have varied widely. Here’s mine.

True, it featured a young man affected and lots of professional men talking about the issues, but it did not feature men abused by women or men whose children have genuinely been alienated wrongfully from them, nor those countering allegations of abuse with cross allegations of alienation.

But that’s what broadcasters and publishers do. They are not obliged to show everything and nor can they, in an hour, while also making good telly that people will be glued to. Nor is there a moral imperative to do so while evidence shows that there is a particularly urgent problem with male abuse of women and children in terms of gravity and numbers, and how it plays out in the family courts, notwithstanding the reality of abuse by women too. (See here and here).

Media regulation through Ofcom for broadcasters or IPSO , IMPRESS or internal codes of conduct for publishers intentionally leave the media free to weave strong opinions, short of significantly misleading the public and that’s always a judgment call. Arguably, it’s pretty similar to lawyers marshalling the facts that fit their client’s arguments short of misleading the court, with judges then making a judgment call as best they can on the evidence, with reasons.

True, the two shocking examples it featured were told from the sole point of view of the mothers and children, and shorn of the context that might have explained them (the judges’ reasons and the evidence the judge heard, like expert opinion and witness statements).

For those who haven’t watched yet, Julia endured 37 hearings and huge costs over 8 years trying to defend an application for shared residence by an ex convicted of sexual abuse against small children, with him getting legal aid while she didn’t, and the court failing to exercise its powers to get it resolved and then bar him from repeat applications until recently, and then only for 3 years.  Jane’s children, James and Ella (also pseudonyms) were forcibly removed by police to the other parent on the basis of a family court order we are told followed findings she had alienated the children. They endured the violation and trauma of police arriving unannounced in the dead of night to force the children out in their pyjamas, despite no concerns for their immediate safety. Jane and her children were not identifiable in the video footage shown of their actual removal and were played by actors vocalising their current views.

But the reality is that privacy laws designed to protect children inhibit people like Julia and Jane from sharing the documents or details of what went on in front of the judge with journalists and prohibit journalists and broadcasters from investigating adequately, let alone broadcasting on the complexity.  See here, for example. As was said in the programme, no court appointed experts would agree to take part.

True, the evidence base for knowing how often the Julia or Jane scenario occurs was impoverished and the programme left many questions unanswered.

But that is because the makers chose to use their hour slot to powerfully show the unexplainable, the unjustifiable, that isn’t normally on show beyond the internet.

The programme asked whether the family justice system (over time and hidden from public scrutiny by ancient privacy laws designed to protect children) has normalised what is not normal – and what the wider public would actually find unacceptable, abhorrent, even abusive, in its own right.

It used the plight of Julia, Jane and their children to powerfully show why increasing numbers of people are now calling for an end to that part of family court privacy law that says you can’t share the documents or story of your actual court case with journalists nor they report on it, even without identifying the children,  unless you apply and get a judge’s permission on every bit of it.

Moreover, the data required to answer such key questions isn’t yet even collected with such that does exist inadequately publicly available.

The important exception for me was about legal aid.

I’d like to see the various published materials make it clear to women currently in need that legal aid is available for those alleging abuse if they qualify financially (which presumably Julia didn’t) and has not been available for alleged perpetrators since 2014. I can see why the broadcasters didn’t say this as the rules are complex and I don’t actually know Julia’s situation. But I do know that many survivors are already incredibly frightened of the family courts and lose months of crucial legal advice and advocacy during the critical early window of court proceedings because they didn’t know /weren’t told they could have legal aid or weren’t adequately helped to get the evidence to claim that.

So I’m okay with Dispatches. And some.

What they did was clever and difficult and pioneering. Which is why it’s rarely done. I’m glad the programme aired and hope it makes a difference.

What’s more I think the family justice system needs the public and the media supporting it right now in the face of wider government policy much more than some realise or articulate. See here, by Sir James Munby.

I’m also with those who are calling for a whole series. A rolling series frankly. There’s a huge appetite and a vital need.

I’m also with the many men and professionals able to listen and reflect on such programmes with an understanding that they don’t negate or seek to negate the experience of either male victims or victims of abuse by women of any type, nor to trash any of the good work the family courts also do.

And I’m firmly with those calling for greater transparency from the family courts as a matter of urgency and repeal of S.12 of the Administration of Justice Act 1960.

[Transparency Note: Louise Tickle, freelance journalist who presented the programme is a member of The Transparency Project]