What is the legal test for taking a baby away before a final care order is made?

And does anyone really understand it?

A newborn is less than seven days old.

Newborns are typically taken into care when a child is assessed as suffering or at risk of suffering significant harm in the family home and the child’s safety “demands immediate separation”.

The study showed significant variation between different regions, with rates for Yorkshire and the Humber more than double those for London over the eight-year period.

Almost all the cases identified by local authorities resulted in a care order being issued by a judge and the baby ultimately being removed – most for adoption, others to foster care or extended family.

Only 14% stayed with their birth parents.

Of immediate concern in the report, as the BBC make clear, is both the significant rise in the number of newborns being subject to care proceedings and the degree to which numbers vary according to region. As Professor Karen Broadhurst explained on the Today Programme on 10th October, the research has provided data about volume but we now need to dig down further to see what are the reasons for the removals. She hopes the research will prompt further debate and discussion and lead to the adoption of nationwide standards of ‘good practice’ when considering how and when to remove new born babies from their mother’s care.

What is the legal test for removing a new born at birth?

There are certainly serious ssues of national importance raised in the report and The Transparency Project hopes to be involved in the coming debate – particularly  as Annie Betram our newest employee also spoke alongside Professor Broadhurst about her experience as a mother whose newborn was removed at 6 days old.

However, the purpose of this post is to look at the legal test for removal of babies. This is because oringally the report from the BBC was different –  this part was missing 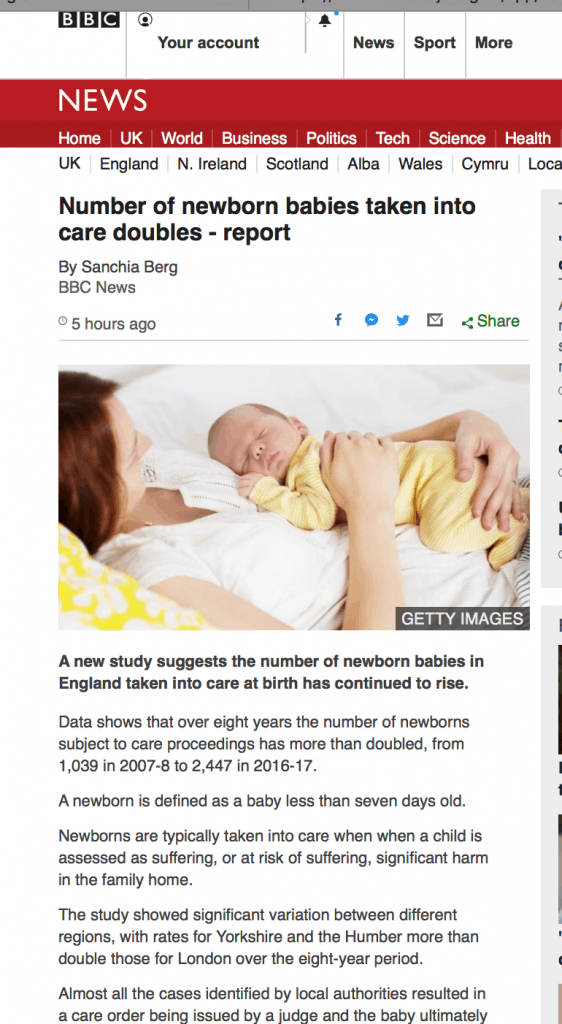 Some members of The Transparency Project expressed unease that this omission had potentially serious implications – this isn’t just a dry technical point but could have serious consequences for how both social workers and parents understand the law. This could in turn impact on how decisions are made.

We are grateful that the BBC amended their report quickly when this was pointed out, but we thought it was worth an attempt to explain further what the test is for interim removal and the significance of those originally missing words.

To understand, we have to look at the difference between an interim and a final care order as there is a different statutory test for each. An interim order is made as a ‘holding position’ before a final order. Final orders should only be made after proper consideration of all the evidence and that often takes some time to gather. Parents have a right to make written responses to the LA evidence, the court may need to be helped by an expert report or see all the hospital records or police logs etc. If there are worries about how safe a child is at home, it may be too risky to just wait until the final hearing before the court endorses removal. This is where ‘interim orders’ come in.

The grounds for making an interim care order are found under s.38 of the Children Act 1989. The court must have ‘reasonable grounds’ to believe that the child has suffered or is at risk of suffering significant harm and that this is as a result of care provided by parents falling below a reasonable standard. This is called ‘crossing the threshold’.

If the threshold is not crossed, the court has no power to make any kind of care or supervision order. If the threshold IS crossed, the court does not have to make an order. It must then go on to consider whether or not an order is actually in the best interests of the child.  The overriding principle is proportionality, reflected in Article 8 of the European Convention on Human Rights (ECHR), It is possible for the state to interfere with an individual’s right to a family life as long as such interference is lawful and necessary; i.e. proportionate.

This is significant as the test under an interim order  – ‘reasonable grounds – is different to the test under the FINAL order (i.e. an order made after a final hearing and all relevant evidence considered). This is set out at section 31(2) and requires the court to be ‘satisfied’ on the balance of probabilities. So that is a higher test.

Without the requirement to consider whether or not an intervention is proportionate, you can see how it might actually be easier to remove new born babies before a final hearing as the court doesn’t need to be ‘satisfied’ about the existence of harm or its risk, only that it has ‘reasonable grounds’ to think it exists.

This is where the requirement for an ‘immediate risk’ comes in.  There has been quite a lot of case law about this, some of which has been usefully pulled together in the case of Re GR (Children) & others [2010] EWCA Civ 871. For further more detailed discussion about the law concerning interim removal of children, see this post from the Child Protection Resource.

In brief, if a LA is asking for an interim care order about a baby and their care plan includes removing that baby from the parents care, the LA will have to prove that the risks posed to the baby by NOT removing are greater than the trauma and upset that would be caused by the removal. It is unlikely that interim removal will be seen by the courts as the proportionate response unless the danger posed to the baby is pretty significant.

We can usefully summarise the present position in this way:

Hopefully this makes it clear just how important it is to be aware of the issues before the court when considering removal of new born babies. If social workers and parents don’t understand that requirement for ‘imminent’ harm there is a real risk that decisions could be made that don’t reflect the legal reality.

How did one parent understand the legal test in her case?

It was interesting to note the divergence of views amongst members of The Transparency Project about the best way to explain the legal test set out above. If there isn’t easy agreement between the lawyers, how do parents see this? We asked Annie how she had understood the legal test which operated in her case. She said this:

As a mum who had given birth to her baby only six days earlier, who sat in the waiting area of the court to be called in still bleeding and leaking breastmilk, my understanding of the threshold for my new-born son to be taken from me was very limited.
However, what was explained to me by my barrister was that this “threshold” meant there needed to be an “immediate risk of harm” to my son in order for him to be taken from me. To me, this meant he was imminently at risk of death, severe injury or severe neglect in my care; none of which I had any history of with my older children. I had experienced mental health problems and I had been in abusive relationships. I had made poor choices and my children had suffered emotional harm as a result. But I had never physically hurt anyone, I had never severely neglected any one of them. My barrister agreed I had not.
I went into court utterly confused; my barrister had told me on the one hand to prepare for the worst, whilst telling me there was no risk of immediate harm to my son and that the court couldn’t remove my child without the threshold having been met. We also had a “safety plan” to put forward to keep my son in my care, and I had researched mother and baby units, or mother and baby foster placements.
I sat down in the courtroom and the Children’s Guardian came to sit next to me; I had no idea who she was and had not had any discussions with her beforehand.
I took the stand not knowing what I was trying to prove. I knew, and all parties agreed I had not hurt my new-born son. I knew, and all parties verbally agreed (though this is not written in the judgement) that there was no immediate risk of harm to my new-born son.
Yet, seven hours later, he was taken out of my arms.
I asked my solicitor to appeal, my barrister refused and said I would have to do it myself. I legitimately felt the judge was wrong – and still do – but I did not know how to go about appealing.
This, just six days after giving birth.

This is clearly troubling and sobering reading for those of us who pride ourselves on doing a ‘great job’ explaining things to our clients. It has often troubled me that parents’ accounts of their experiences in the system rarely mention their lawyer. It is becoming sadly clear why this is so.

As was discussed at #CPConf2018, in the context of risk of emotional harm, the lawyers have to do a better job of explaining what the law is and how it operates. Nothing can remove the pain and anguish that follows the removal of a baby into care, but lack of understanding about the law and rights of appeal, should not be allowed to exacerbate it.