Talking about adoption and voluntary foster care under section 20

The launch of a Family Rights Group report ‘Co-operation or Coercion? Children coming into the care system under voluntary arrangements’, has triggered discussion about the use of  “section 20”, the piece of law that allows a child to be placed voluntarily into foster care. In particular, about “foster-to-adopt” placements, where the foster carers who take on a child are already authorised as adopters. The aim of this is to protect the child against moving to yet another placement if the court eventually decides that the child can’t go home.

It’s important to know though that whilst foster to adopt carers are as adopters generally, that does not necessarily mean they will be allowed adopt this particular child, or indeed that this particular child will be adopted at all. There has to be a formal decision by the local authority that its right for the particular child to be adopted, the court would need to approve that plan by making a placement order AND the foster to adopt carers would have to be approved as a good match to care for this child long term, as opposed to just foster care. If you want to read more about the ‘foster to adopt’ scheme, CoramBAAF have provided some useful guidance here.

We thought that it would be useful to summarise some of the themes and areas of discussion.

Firstly, here is the link to the report. It’s pleasing to note in passing that the report says our Guidance on the use of section 20 is getting some use :

In response to being asked whether they had any guidance for social workers within the authority about section 20 arrangements, a number of authorities referred to the ADCS/Cafcass guidance or The Transparency Project guidance.

Secondly, here is Sarah Phillimore’s write up of the FRG launch event.

Thirdly, Louise Tickle* wrote two related pieces for The Guardian on the day of the report’s publication : Babies at risk of ‘adoption by stealth’, family charity warns, and ‘I had two children adopted without my permission’ (Amy, 30, explains how twice she was ‘tricked’ into a situation in which her children were adopted by strangers).

‘Adoption by stealth’ is not a phrase used in the FRG report, but it is a direct quote from Cathy Ashley, their Chief Executive and it is used in the context of foster-to-adopt placements. Sarah Phillimore raised concerned about references in these articles to “adoption by stealth” without any indication that babies cannot be adopted away from their families without a court process on her blog here : ‘Adoption by Stealth’ – the dangers of rhetoric and the law of unintended consequences. Quite independently, two people have contacted us raising essentially the same issue – that parents might not realise that there was a court process and that the individual account of the “tricked” mother didn’t “ring true” (which we took to mean it was an account which was so disembodied from context that it might mislead). We think Sarah’s piece deals with those issues. 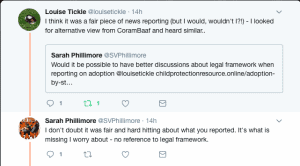 Sarah and Louise have discussed this via twitter, and Sarah is hoping to write a comment piece for The Guardian. If that happens we’ll add a link here.

Others on twitter and in correspondence with us, have raised the significant absence of mention of the court process from the FRG report – and indeed the absence of mention of the various internal procedural steps and safeguards between placement of a child in a foster to adopt placement that could potentially turn into an adoptive placement and the actual adoption of the child in question. Discussion around that second issue (internal procedures) is one which Sarah Phillimore has edited her post to incorporate. Clearly, accounts like those provided in Louise Tickle’s article and by the parents involved in the FRG inquiry leading to this report, suggest that whatever legal and procedural safeguards there are, in some cases parents are left unclear about what is happening and what the ramifications of giving their s20 consent may be further down the line.

Alongside ensuring that parents understood what they were signing up to, one of the things we wanted to ensure when writing our guidance note was making sure that parents were not put off agreeing to the accommodation of their children where that was the right thing for them and their child. FRG suggest legal advice must be made available for parents in foster to adopt cases at the point of the parents agreeing to them becoming looked after, and this would obviously help avoid the sort of confusion that led us to write our guidance in the first place.

There has also been some discussion between members of the TP team about their different experience of the prevalence of FtA placements. Most of us have seen little evidence of it happening on the ground in our particular geographical area / field of work, so the enthusiasm with which it has been taken up is probably patchy.

It has to be a good thing that debate about these issues has been generated. We’ll try to keep track of any further significant lines of discussion and update or repost.