Achievement unlocked : Our experience of the IPSO process 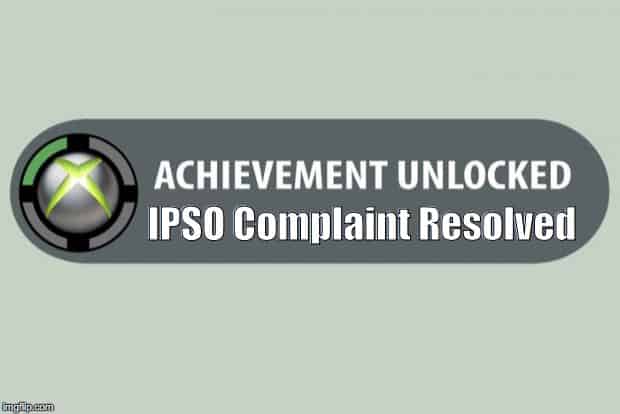 The Independent Press Standards Organisation have recently published the “Resolution Statement” in respect of our complaint about an article by The Telegraph’s Christopher Booker regarding Court of Protection proceedings concerning the now deceased brother of Teresa Kirk, Manuel Martins.

This was the column which was ultimately the subject of the IPSO complaint.

Other posts we have written about the Kirk case can be found here (most recent first) :

We complained to the newspaper about inaccuracies and distortions in the Booker article, and wrote about that here : Fact checking across the universe…. As that blog post explains, The Telegraph rejected our complaints and so, in May we took the matter to IPSO, as a result of which The Telegraph agreed to issue a correction and we accepted their offer. After some hiatus the IPSO record of how our complaint was resolved has now been published. You can read the resolution statement here.

It has taken a long time and a considerable amount of perseverance to get to this point, but we are reasonably pleased with the outcome. The restrictions on what we could publish did not feel very transparent or fair, particularly since the process gives the newspaper being complained about (who by default will already have published something from their perspective to all the world) a right of veto over publication of the correspondence to and from IPSO. Here, The Telegraph were (in our view) unjustifiably critical of us in the course of responding to our complaint, and we then had to rebut these criticisms in our response. We felt this was an unhelpful attempt to deflect attention from the substance of a legitimate complaint. We were pleased to be able to secure a reference to this criticism in the Resolution Statement so that it is publicly known that such tactics have been deployed, lest they be used again. We would have preferred to have published the precise wording of The Telegraph’s attack and our response so readers could make up their own minds, but they can probably draw their own conclusions from the neutral summary published by IPSO and the fact that The Telegraph was not prepared to publicly stand by what it said in private to IPSO.

Notwithstanding the structural issues with the scheme, we have found the staff at IPSO to be courteous, efficient and even handed in all their dealings with us, and willing to negotiate with us constructively over the contents of the resolution statement. As a result of resolving this matter by agreement of course there is no formal ruling on the merits of those aspects of the complaint that The Telegraph did not accept as valid.