What does open justice actually mean? 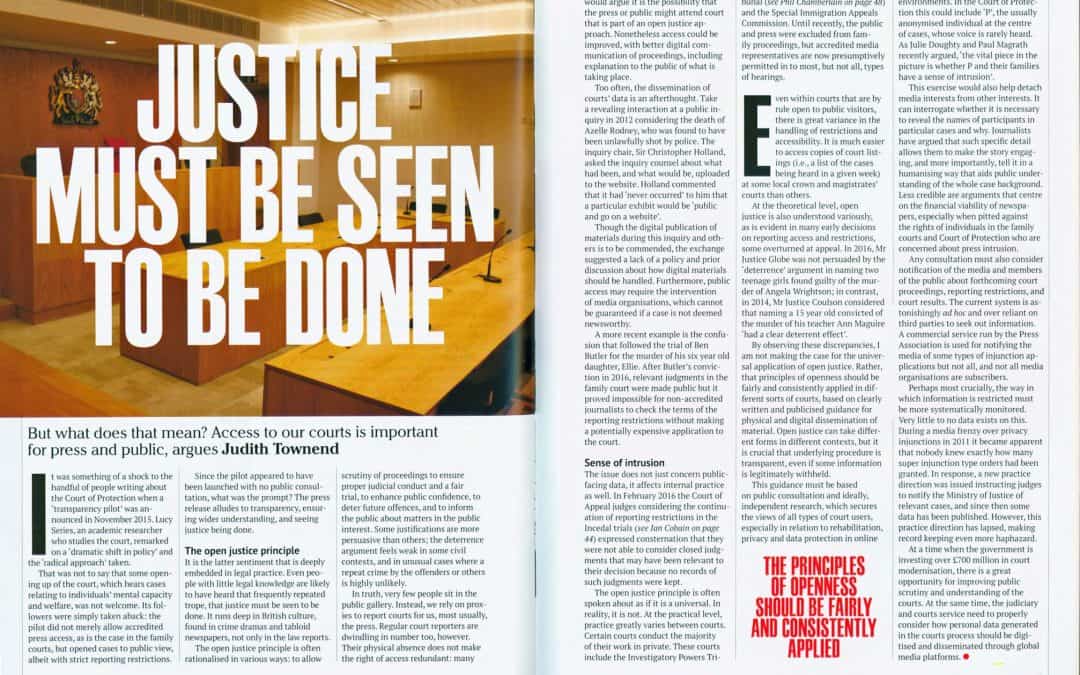 The notion that justice must be seen to be done needs little introduction to either a lay or legal audience,  but its familiarity belies an underlying complexity. See, for example,  PNM v Times Newspapers, to be heard by the Supreme Court this week.

The court will hear an appeal against the Court of Appeal’s decision to allow reporting of information about a person named in open court, but not charged with any offence, nor a witness or party to the case, in which seven people were convicted of serious sexual offences – including rape and conspiracy to rape children, trafficking and child prostitution.

As Hugh Tomlinson QC notes in a preview on the Inforrm blog, it’s a ‘difficult’ case, ‘which is likely to produce a definitive restatement of the principles which apply when a party is seeking to derogate from the principles of open justice’.

Plans to modernise the courts system throw up new problems for open justice and privacy rights, which I’m not wholly confident are being fully considered in the context of digital technology and competing individual and organisational interests (I hope I’m wrong).

All this is something I’ve written about for the Justice Gap’s new issue of Proof Magazine, which offers a wide range of (and more expert than me) perspectives on access to courts, and includes a new charter for open justice, focusing on access to information in criminal trials, led by the Centre for Criminal Appeals.

My article is uploaded here and a version appears below:

Justice Must Be Seen To Be Done … But What Does That Mean?

It was something of a shock to the handful of people writing about the Court of Protection when a ‘Transparency Pilot’ was announced in November 2015. Lucy Series, an academic researcher who studies the Court, remarked on a ‘dramatic shift in policy’ and the ‘radical approach’ taken.[i]

That was not to say that some opening up of the Court, which hears cases relating to individuals’ mental capacity and welfare, was not welcome. Its followers were simply taken aback: the pilot did not merely allow accredited press access, as is the case in the family courts, but opened cases to public view, albeit with strict reporting restrictions.

Since the pilot appeared to have been launched with no public consultation, what was the prompt? The press release alludes to transparency, ensuring wider understanding, and seeing justice being done.[ii]  It is the latter sentiment that is deeply embedded in legal practice. Even people with little legal knowledge are likely to have heard that frequently repeated trope, that justice must be seen to be done. It runs deep in British culture, found in crime dramas and tabloid newspapers, not only in the law reports.

The open justice principle is often rationalised in various ways: to allow scrutiny of proceedings to ensure proper judicial conduct and a fair trial, to enhance public confidence, to deter future offences, and to inform the public about matters in the public interest. Some justifications are more persuasive than others; evidence to support the deterrence argument is weak in civil and criminal contexts, and especially in unusual cases where a repeat crime by the offenders or others is highly unlikely.

In truth, very few people sit in the public gallery. Instead, we rely on proxies to report courts for us, most usually, the press. Regular court reporters are dwindling in number too, however. Their physical absence does not make the right of access redundant: many would argue it is the possibility that the press or public might attend court that is part of an open justice approach. Nonetheless access could be improved, with better digital communication of proceedings, including explanation to the public of what is taking place.

Too often, the dissemination of courts data is an after-thought. Take a revealing interaction at a Public Inquiry in 2012 considering the death of Azelle Rodney, who was found to have been unlawfully shot by police. The Inquiry chair, Sir Christopher Holland, asked the Inquiry counsel about what had been, and what would be, uploaded to the website.  Holland commented that it had ‘never occurred’ to him that a particular exhibit would be ‘public and go on a website’.[iii]

Though the digital publication of materials during this Inquiry and others is to be commended, the exchange suggested a lack of a policy and prior discussion about how digital materials should be handled. Furthermore, public access may require the intervention of media organisations, which cannot be guaranteed if a case is not deemed newsworthy.

A more recent example is the confusion that followed the trial of Ben Butler for the murder of his six year old daughter, Ellie.  After Butler’s conviction in 2016, relevant judgments in the family court were made public but it proved impossible for non-accredited journalists to check the terms of the reporting restrictions without making a potentially expensive application to the court, as the barrister Lucy Reed documented on her blog.[iv]

The issue does not just concern public facing data, it affects internal practice as well. In February 2016 the Court of Appeal judges considering the continuation of reporting restrictions in the Incedal trials (see Ian Cobain in Proof) expressed consternation that they were not able to consider closed judgments that may have been relevant to their decision because no records of such judgments were kept.[v]

The open justice principle is often spoken about as if it is a universal. In reality, it is not. At the practical level, practice greatly varies between courts. Certain courts conduct the majority of their work in private. These courts include the Investigatory Powers Tribunal (IPT) and the Special Immigration Appeals Commission (SIAC). Until recently, the public and press were excluded from family proceedings, but accredited media representatives are now presumptively permitted in to most, but not all, types of hearings.

Even within courts that are by rule open to public visitors, there is great variance in the handling of restrictions and accessibility. It is much easier to access copies of court listings, ie. a list of the cases being heard in a given week, at some local crown and magistrates’ courts than others.

At the theoretical level, open justice is also understood variously, as is evident in many early decisions on reporting access and restrictions, some overturned at appeal. In 2016, Mr Justice Globe was not persuaded by the ‘deterrence’ argument in naming two teenage girls found guilty of the murder of Angela Wrightson;[vi] in contrast, in 2014, Mr Justice Coulson considered that naming a 15 year old convicted of the murder of his teacher Ann Maguire ‘had a clear deterrent effect’.[vii]

By observing these discrepancies, I am not making the case for the universal application of open justice. Rather, that principles of openness should be fairly and consistently applied in different sorts of courts, based on clearly written and publicised guidance for physical and digital dissemination of material. Open justice can take different forms in different contexts, but it is crucial that underlying procedure is transparent, even if some information is legitimately withheld.

This guidance must be based on public consultation and ideally, independent research, which secures the views of all types of court users, especially in relation to rehabilitation, privacy and data protection in online environments. In the Court of Protection this could include ‘P’, the usually anonymised individual at the centre of cases, whose voice is rarely heard. As Julie Doughty and Paul Magrath recently argued, ‘the vital piece in the picture is whether P and their families have a sense of intrusion’.[viii]

This exercise would also help detach media interests from other interests. It can interrogate whether it is necessary to reveal the names of participants in particular cases and why. Journalists have argued that such specific detail allows them to make the story engaging, and more importantly, tell it in a humanising way that aids public understanding of the whole case background. Less credible are arguments that centre on the financial viability of newspapers, especially when pitted against the rights of individuals in the family courts and Court of Protection who are concerned about press intrusion.

Any consultation must also consider notification of the media and members of the public about forthcoming court proceedings, reporting restrictions, and court results.  The current system is astonishingly ad hoc and over reliant on third parties to seek out information. A commercial service run by the Press Association is used for notifying the media of some types of injunction applications but not all, and not all media organisations are subscribers.

Perhaps most crucially, the way in which information is restricted must be more systematically monitored. Very little to no data exists on this. During a media frenzy over privacy injunctions in 2011 it became apparent that nobody knew exactly how many super injunction type orders had been granted. In response, a new practice direction was issued instructing judges to notify the Ministry of Justice of relevant cases, and since then some data has been published. However, this practice direction has lapsed, making record keeping even more haphazard.

At a time when the government is investing over £700 million in courts modernisation, there is a great opportunity for improving public scrutiny and understanding of the courts. At the same time, the judiciary and courts service need to properly consider how personal data generated in the courts process should be digitised and disseminated through global media platforms.

Judith Townend is a lecturer and researcher based at the University of Sussex and a member of the Transparency Project core group. This blog post is based on an article that first appeared in Proof Magazine, Issue 2, January 2017.