What About Me? Reframing Support for Families following Parental Separation 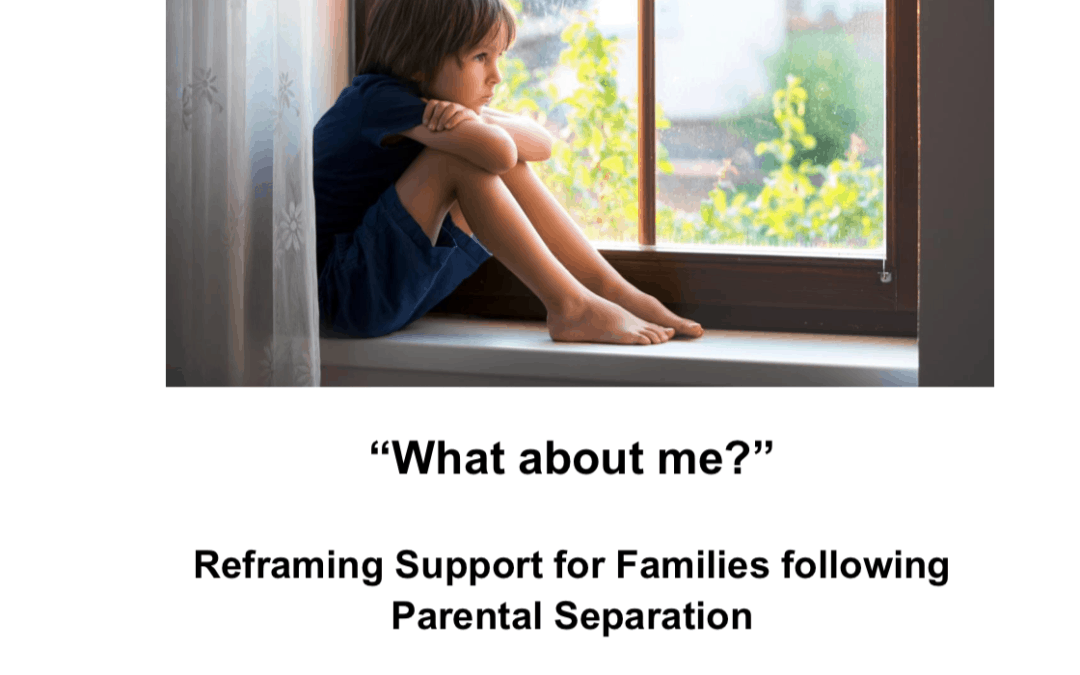 Some have wondered how the working group charged with reform proposals for private law family cases will integrate learning from the Harm Report (on better protecting victims of domestic abuse and their children) within the emerging direction of travel for private law reform.

Last year’s Family Justice Council event Do separating families need the family court featured a range of views on this.  Rosemary Hunter’s lecture at Rights of Women also explained thinking behind a particular ‘protection from abuse’ perspective. Hunter and Cobb J are the two common members of both the spotlight panel that produced the Harm Report and the PrLWG.

The publication of the “What about me?” Reframing Support for Families following Parental Separation report by the Family Solutions Group (subgroup of the PrLWG) last week, ahead of the final report of the Working Group, is perhaps an early indicator of what to expect from the final report, albeit its focus is the pre-court arena for separating families in England.

Cobb J apparently set up a multi disciplinary sub group of the PrLWG in January 2020 to report to the PrLWG on improvements capable of immediate implementation in the pre-court arena. The report seems to go well beyond this, laying out the blueprint for system-wide change long term, and a re-positioned family court within that. It struck me as more of an ambitious attempt at a coherent vision of the future than concrete proposals for immediate change.

The Reframing report is endorsed by the President and Cobb J, Chair of the PrLWG, though it was pointed out on twitter that PrLWG members hadn’t seen a copy or endorsed it pre-publication:

Other responses to the report seen so far include a piece in the Times authored by sub group members and the Mail reporting a rather odd recommendation of a new co operative parenting threshold test of whether parents can look each other in the eye at handovers without context.

The report references three main drivers – aligning actual arrangements and service provision with the original principles of the Children Act 1989; embedding children’s Article 12 Convention rights to be heard directly in processes settling arrangements about them in and out of court; and pragmatically meeting the needs of a court system in crisis (even before the pandemic).

In short, my reading of what the Reframing Reports says is:

We CAN divert significant numbers of separating families from the courts to meaningful support AND do better at protecting children who aren’t safe (including from domestic abuse) by distinguishing early and safely between:

And re structuring information and service provision coherently around these two distinct cohorts of separating families with children, following different pathways from the outset.

The presumption of involvement of both parents / The Harm Report

For those on the Co operative Separated Parenting Pathway outside the court process, the starting presumption should remain that involvement of a parent in the life of a child will further the child’s welfare, provided that parent can be involved in the child’s life in a way that does not put the child at risk of suffering harm.

For those on the Safety Pathway, where the Family Court will be central, the report clearly states that where there is even an allegation (or professional suspicion) of harm or risk of harm by domestic abuse to a child or parent, let alone an admission or evidence of it, the presumption must not apply.

The Reframing Report explicitly welcomes the Harm Report and backs the urgent need for a review of arrangements for the safety of children who are in violent households, and of hearing from those children. This reflects this recent Government statement. The Report expressly limits the presumption of parental involvement for Safety Path cases, and supports the Harm Report view that the Family Court needs to become far better in its safeguarding role for these families.

What’s less clear is which recommendations are for immediate delivery by the family justice sector and which are necessarily longer term / dependent on other bodies or recommendations such as the call for new children and families leadership with responsibility for separating families – this is currently spread across the MOJ, DfE and DWP in England. Another aspect that isn’t entirely clear is the remit of the multi disciplinary Family Justice Reform Implementation Group (on which the MOJ sit) in driving the reforms over the next 5-10 years.

The report calls for a new, one-stop, online, authoritative, Separating Families Online Hub, to co-ordinate information and signpost children and their parents to a coherent range of locally organized and delivered services under a Separating Families Alliance. Although the creation of the Separating Families Hub seems to be a future recommendation for Government, it’s suggested in the meantime that the system can deliver more via the existing Cafcass Co-Parenting Hub in providing some information to parents as well as directly to children.

The Report also recommends a major Government-led public education drive, that should be coordinated with forthcoming 2021 divorce and separation legislation, with information to health, education etc professionals. They and the Hub are envisaged as key to signposting separating families early to a network of mediators for early Information and Assessment Meetings (IAMs). (See below).

The report envisages a new role for mediators delivering IAMs much earlier in the separation journey before attitudes harden or problems escalate. (The statutory requirement to attend a Mediation Information and Assessment Meeting – MIAM – before going to court would continue alongside). And screening, assessing and diverting those children & families who need to be on the Safety Pathway, to the Family Court and safety focused services. The Report recommends a new collaborative approach at local level and new training for mediators. It sets out the proposed content of that training for mediators, judges and lawyers at Annex 7. Detailed proposals for safe screening are set out at Annex 4.

The Report recommends that mediators also be trained in the impact of continuing conflict on children and in relational skills, so as to provide improved mediation services to those for whom it is safe to do so. They should promote a holistic, integrated and joint approach to co operative parenting and supply legal information to separating parents together (in preference to them receiving legal advice elsewhere individually), re-framing disputes away from ‘legal issues’ as ‘parenting disagreements’. The report calls for restoration of legal aid for early legal advice, not as a gateway to mediation but for those identified as still having a legal problem after an IAM.

The report strongly recommends that all mediation (and other forms of resolution) should from now on routinely involve children aged ten and over directly and calls for the legal aid changes that would be needed to enable this. A pilot project that tests out a model of child impact mediation with integrated child advocacy alongside is suggested.

A new Part 3 of the Family Procedure Rules

The report recommends that the Family Court is empowered through a new Part 3 Protocol to support more use of existing Family Procedure Rule powers to divert families away from court to mediation and other non legal services, with new use of costs sanctions against families and lawyers where appropriate. A pilot of a proposed new Part 3 Protocol is already underway. The President and Law Society are asked to liaise on how the Law Society Family Law Protocol can be enforced where needed against lawyers.

Parenting Programmes and other support services for parents

Parenting Programmes are currently only patchily available and the report calls for new co-ordinated,  accredited, kite-marked, Separating Parenting Programmes to become the norm for separating families. Again, it’s far from clear who would be responsible for setting up and funding the suggested Supporting Separating Families Alliance to map existing local services and promote a kite marked consistent approach on parenting classes and other family separation support services. The report says this is outside their remit but suggests these could be delivered under the ambit of the forthcoming new divorce legislation. A pilot is suggested to assess whether funded parenting courses do in fact reduce court applications and another to work out whether the network of 150 or so existing physical Family Hubs can offer a base for separating family services. (We recall that ‘Hubs’ were also central to the recommendations in the Family Justice Review led by David Norgrove in 2011). In the meantime the report says that Family Justice Boards, lawyers and mediators will need to ensure they know what is available locally, supported by the Cafcass Co Parenting Hub. Annex 5 provides the detail of proposed Supporting Co Operating Parents Programmes.

All services assisting parents about child arrangements should be designed and evaluated on the basis of a presumption that effective ways of hearing the voices of children over 10 are embedded going forward, including solicitor-led interventions. The report recommends a statutory presumption in due course to re-inforce this.

A new role for Cafcass offering direct services to children

Permission requirements should also change to enable children themselves to apply directly to court more easily.

The NFJO (or similar) should coherently evaluate progress and collect data on the children of those separating without interventions, while the multi disciplinary Family Justice Reform Group will lead in driving and embedding reforms over the next 5-10 years

The above are but some of the Report’s recommendations and reasons for trying to shift many more separating families and their children away from an adversarial family justice system approach toward a family solutions system approach, long before they get anywhere near the court door.  And on the wider, long term, societal, system-wide change required to truly underpin that aspiration.

What might be helpful is a clear summary of which of the recommendations are capable of immediate implementation within existing Family Justice System services and over what proposed time line. The worry otherwise is whether most of what would really form the foundation of the vision is aspirational and for someone else (the Government?) to do in the future.  (The new Family Hub, the education campaign, the integrated services for families, the funding to routinely engage children over 10 in mediation…) The reality on the ground for the foreseeable future may be little more than the Family Court shutting its doors to a whole cohort of separating families via a new Part 3 approach and protocol; new use of costs sanctions; and some sort of new threshold for entry to the family court welfare-wise. With Cafcass rolling out some direct services to children of separating parents and bumping up their Cafcass Co-Parenting Hub website to provide information to children and their families, and mediators expected to get on with the rest, in the continuing absence of a coherent network of high quality direct services and parenting programmes on the ground.

No doubt some of this will be clearer after the the launch seminar and Q&A this evening, featuring the President and Cobb J; publication of the forthcoming final Private Law Working Group report, and the FJC event in December.