The Harm Report – one year on 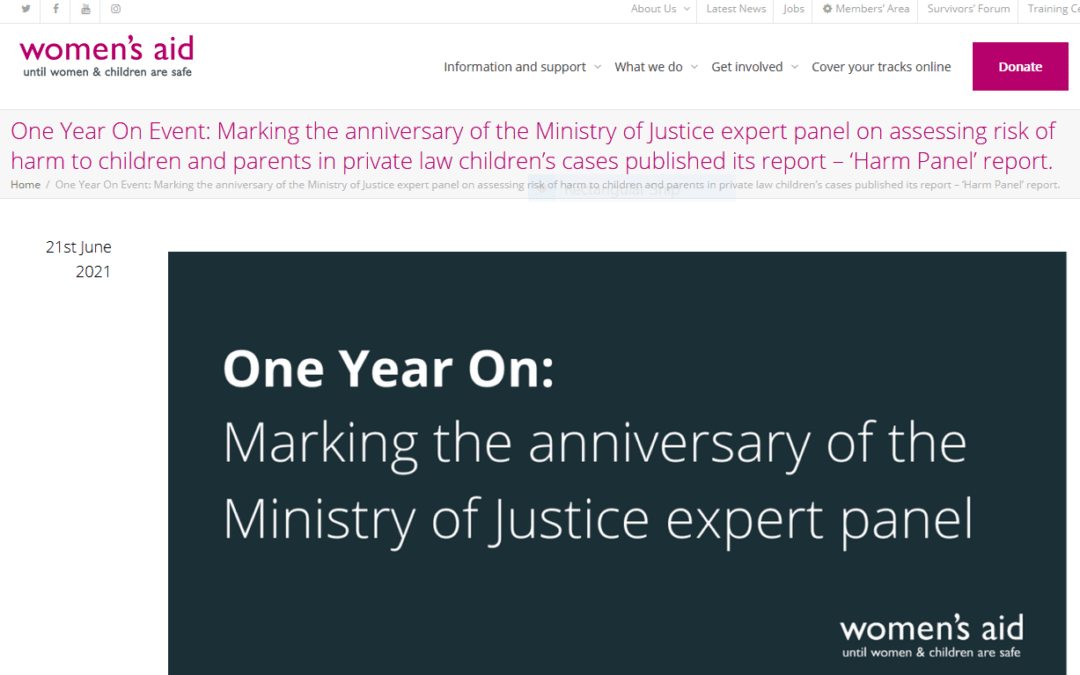 June 2021 sees the first anniversary of publication of the report ‘Assessing risk of harm to children and parents in private law children cases’ (the Harm report). We have published a number of posts about the report. The UK government responded to the report that they had ‘carefully considered the panel’s conclusions’ and were ‘determined to take action to improve the experience of victims of domestic abuse in our family courts’. The Ministry of Justice was :

committed to both immediate action and longer-term reform, to ensure the system fully supports those who are victims of domestic abuse or otherwise vulnerable, and delivers the right outcomes for them and their children

So, one year on, how much has been achieved? Not enough, say Rights of Women who have sent this letter, signed by about 50 NGOs, lawyers and academics. On the same note, Women’s Aid organised a very interesting webinar on 21 June, giving opportunities for presentations (to more than 300 attending) from abuse survivors; campaigners; the Ministry of Justice; the Domestic Abuse Commissioner; a High Court judge; and one of the co-authors of the report. This post is a summary of that event.

The session was chaired by the Chief Executive for Women’s Aid, Farah Nazeer. Four personal accounts of survivors of domestic abuse included a teenager who emphasised how much he had wanted to talk directly to the judge about his fear of contact sessions that were meant to be supervised, but where he was on one occasion assaulted by his father. He described Cafcass officers as distant and cold, and said that they made him feel the abuse was his own fault.

Campaigner Natalie Page, founder of Court Confidence and #thecourtsaid in England, said that families were yet to see any changes. She acknowledged that substantial change will take a long time but said that some of the report’s recommendations could be applied now, for example the consistent use of Practice Direction 12J. Ms Page called the family court an ‘institution that operates behind closed doors’. She raised concerns that ‘parental alienation’ was being alleged more commonly, resulting in children being viewed as their mother’s mouthpiece and being listened to less in the proceedings.

Lord Wolfson, the government minister with responsibility for family justice, outlined what progress had been made during the year. These included:

2. A more investigative than adversarial approach that was being tried in North Wales and Dorset later this year. (We had been under the impression that the piloting of this model was separate from the two ‘pathfinder’ pilots – see Comment below)

4. Opportunities for monitoring by the Domestic Abuse Commissioner and the Victims Commissioner (see further below from Nicole Jacobs).

Lord Wolfson said that a formal update on progress is to be issued shortly.

Professor Rosemary Hunter gave a concise summary of developments in the context of the Harm report’s recommendations. She first referred to the concept that had re-emerged from the Family Solutions Group’s report, that the crisis in the family courts was not the courts’ failure to protect children and parents from domestic abuse but because too many parents went to court instead of engaging in cooperative parenting. The ‘solution’ to this problem is to reduce demand on the court, with domestic abuse stuck back in a box of minority concerns. This suggestion is in direct contradiction of the messages of the Harm report. Prof Hunter emphasised the evidence that the majority of parents do settle outside court, but for the smaller number who apply to court, most cases have safeguarding issues and interventions are required.  She then moved on to the President’s Private Law Working Group, that now appears to have wound up – without ever having met to discuss the Harm report. The Ministry of Justice has now set up a ‘family justice implementation group’ instead. She feels that there are now no coherent overriding objectives for family court reform, with two separate sets of ideas about a solution: the Working Group, Family Solutions Group and implementation group that represent those within the system on the one hand; on the other hand is the Harm report representing children and court users. In her view, the latter is being sidelined and all we will see are tweaks to the Child Arrangements Programme without addressing the fundamental problems. Prof Hunter concluded that she was sorry to sound so pessimistic and hoped she would be proved wrong.

Nicole Jacobs, the Domestic Abuse Commissioner, also mentioned a proliferation of groups and lack of joined-up thinking. Her immediate priority is identifying ways of getting the data she needs to start her monitoring and oversight role. She said this first was difficult because of the lack of transparency in the court system. She is planning a series of round table discussions to try to find ways of extracting the information. She had not succeeded in her efforts to get mandatory judicial training on domestic abuse into the Bill, but she is in discussion with the Judicial College (responsible for training judges). She said that a huge support programme is needed for people going into court and was concerned that litigants who were entitled to legal aid were not accessing it.

Next, barrister Charlotte Proudman spoke briefly about the recent appeal, Re H-N, where she acted for two of the appellants. She emphasised the problems associated with women being criticised in court for not disclosing abuse early enough and the lack of understanding amongst the judiciary.

Pragna Patel from Southall Black Sisters also spoke about legal aid – she was firmly of the view that more women than now must be given proper representation. She also identified an important problem with alternative dispute resolution (ADR) in that for some black and Asian women, ADR meant entering into types of community justice that could lead to dangerous results.

Mrs Justice Knowles was the final listed speaker. Interestingly, she is a former child and family social worker. She has taken over from Mr Justice Cobb as the lead judge on domestic abuse. She said that she knew there was a huge amount to do and that a more investigative and problem solving approach was needed. Knowles J is also the lead judge on Family Drug and Alcohol Courts which she says achieve impressive results with multi-disciplinary teams and continuous judicial input.

The Q & A session was preceded by a brief contribution from Neil Barcoe who is the Deputy Director for Family Justice in the Ministry of Justice. He wanted to reassure people that, contrary to what Prof Hunter had said, he was focusing on an investigative model that would be piloted in a number of areas and that he was looking at PD 12J. (As this seems slightly at odds with Minster having said the new model was only in the pathfinder areas, we are trying to get this clarified.)

The Chair narrowed down the many questions she had received into three themes: the training and accountability of judges; when will the Domestic Abuse Act be in force? and why isn’t PD12J being followed? The second question wasn’t directly answered but that may be because the meeting was going over time.

Knowles J addressed the first question. All new judges have mandatory induction training that includes a core component on domestic abuse. Continuing training programmes include domestic abuse. There is a task force currently reviewing and updating all the relevant training. Ms Jacobs addressed PD12J. She said that one of the purposes of the round table discussions she was organising was to plan a way to examine cases where PD12J had not been followed but avoiding risks of interfering with or re-litigating decided cases. Ms Patel reiterated that unless women had advocates in the court room, judges can’t be challenged. Ms Page again criticised the closed nature of the system and the need for scrutiny to be in place, while still protecting children. Prof Hunter said she was pleased to hear from Mr Barcoe that there was a level of priority for the Harm report that she had not yet seen, but without the systemic barriers identified in the report being overcome or addressed by structural change, mixed messages about the family court’s role would continue.

We agree that it is difficult to form a coherent picture of what is happening and what is planned in response to the Harm Report. There are indications that piloting the investigatve model that we discussed in this post on the Family Justice Council webinar in December, is in fact being subsumed into the pathfinder pilots in North Wales and Dorset. However, there is contradictory information emerging from the various groups and initiatives:

When we hear descriptions of the multi-disciplinary, non adversarial, investigative approach, as was outlined in the FJC December webinar, we may wonder where courts and practitioners are going to find the time, everyone being so overstretched. The Harm report concluded that such an approach would be possible if the barriers of the pro-contact culture; silo working; marginalising or not listening to children; and resource limitations were all broken down to reconfigure a system where families’ safety could be better assured. The Women’s Aid webinar was timely in reminding those at the centre of the system, as well as those who use the courts, that the Harm report called for redesign:

The basic design principles for private law children’s proceedings should be:
• A culture of safety and protection from harm
• An approach which is investigative and problem solving
• Resources which are sufficient and used more productively
• With a more coordinated approach between different parts of the system.
Procedures need to be designed with the needs of children, litigants in person and domestic abuse and other serious safeguarding concerns as central considerations

We should mention that, although there was little reference to progress at Cafcass in the the webinar, the organisation is making some progress in reviewing and improving practice, as outlined here.