Yesterday the Guardian published Louise Tickle’s hard hitting opinion piece about failures of Herefordshire Council with the headline : The state has a terrible secret: it kidnaps our children. Unsurprisingly it has generated a lot of comment. With familiar signal words like ‘secret’ and ‘kidnap’, is this another one of those social worker or family court bashing articles, which is typically heavy on criticism of the system but light on facts?

Louise Tickle is a freelance journalist, and also a member of The Transparency Project. I knew Louise had a piece coming out, but as I clicked on the link on my phone and read the headline I thought ‘Bloody hell, Louise!’ and wondered if I was approaching an awkward moment where, in the interests of balance, I would have to criticise the work of a colleague in the way that I have previously criticised the frankly shoddy and misleading journalism of certain other journalists. As I read the article then, I was scanning for clangers, things that I would have to pull her up on, that showed that the headline or the premise it was attempting to summarise was not justified. Although I know that the headline is not something that will have been written or approved by the journalist it ought to at least give a clue as to where the article was going. And this piece was every bit as hard hitting as the headline warned it would be. 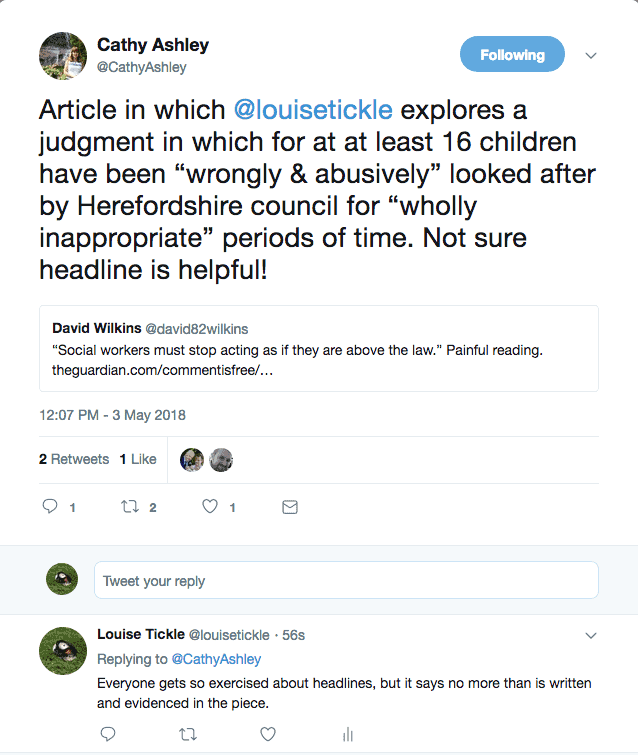 But by the end of the article I thought it was rightly so. Here is not the place to set out my views in full on that, as this post is intended to give a flavour of the range and nature of responses rather than functioning as my own soapbox. I’m going to write those up more fully on my own blog later (and I will add the link here when I’ve done it).

But for the sake of balance and transparency, I’ll briefly sketch my view : there was nothing in this piece which was not soundly rooted in what actually happened, as described in equally forceful but more judicial language by Mr Justice Keehan in the judgment he published in the case last month (props to Louise, she made sure that The Guardian included a direct link to the judgment for those who wanted to read it – you can read it here).

Kidnap is a word that appears in the headline and the piece itself. In layman’s terms, it is an accurate, if uncomfortable description for what happened in the cases Tickle describes : how is the unlawful taking of children and the refusal to return them not kidnap? It would be called kidnap (or abduction) if a parent did it. It is still kidnap if the state does it. The judge doesn’t use the word kidnap, which has a specific legal meaning too, but he does say this :

I have never before encountered two cases where a local authority has so seriously and serially failed to address the needs of the children in its care and so seriously misused, indeed abused, the provisions of section 20 of the Children Act 1989.

My view is that anyone who has dismissed this article because of their knee jerk reaction to the headline or the use of words like kidnap, should read the full judgment of Keehan J and then reappraises their instinctive reaction. There is room for different views about it, but this is no mere tabloid puff. It is a strongly held and strongly argued opinion based on facts, and one which the author has been willing to defend.

Tickle ends with this challenge to the social work profession as a whole, and to the family justice system :

Social workers must stop acting as if they are above the law. In reporting on family cases, I have observed the most extraordinary sense of entitlement and arrogance both in court hearings and in email communications when attempting to investigate and highlight poor and unlawful practice. There is no humility. There is instead a knee-jerk opposition to anyone presuming to want to hold a local authority publicly to account. Given that family cases are heard in private, if the judge had not rejected the council’s plea to keep its identity secret, nobody would ever have known about the longstanding and outrageous failings of Herefordshire’s social work team. Why, just because the state is the “corporate parent”, should it usually get a free pass on scrutiny and accountability?

Kidnapping children is wrong, whoever does it. When it is the state, which then argues for its transgressions to remain secret in the family courts, it is terrifying. There are growing calls for these courts to lose the privilege of privacy that child protection professionals have benefited from for so long – because how many more human rights abuses are being hidden from view when judges opt not to publish judgments, and when journalists who go to family courts are not allowed report what they see?

One person emailed me to alert me to the publication of a very ‘one-sided’ article (“even for the Guardian”). He was concerned about the “failure to recognise that social workers have a thankless task and, as post-Baby P showed, they’re the first to be targeted by the media when the make an incorrect assessment. Their workload also look hideous, in a perpetual era of worsening austerity.” I asked if he had read the linked judgment. He hadn’t. My view is that there is no criticism of individual social workers in Tickle’s piece – if anyone is criticised within Hereford, it is senior managers. But they are not named and shamed, and nor are they smeared with un-evidenced criticism.

Overall, the reactions to the piece, the headline, the word kidnap have ranged from the very complimentary to the very cross – and that split can also be seen represented across responses from social workers. But it is positive to see that polite but robust discussion has been generated by Louise’s article. Hopefully this blog post will help prompt a continuation of that discussion, both about social work and about journalism.

To get the ball rolling, here is our Alice Twaite’s initial response :

This is hard to read – especially the headline. Uncomfortable I mean.

I desperately tried to rationalise it. Surely something was a bit exaggerated etc. But in all honesty I wholly agree.

Even with the headline.  I wondered – is that headline constructive? And I thought no. It really isn’t. But the job of a journalist isn’t to be constructive. Rather to shock us into noticing within the bounds of accuracy and balance.
We equally need to be shocked into action on the continuing evidenced failures of IRO’s to feel able to do what the law demands of them for children – i.e. escalate to court. This is a perfect example of that – knew and did not – where often it’s less clear that they grasped it fully.

Here is some of the discussion we spotted on twitter. 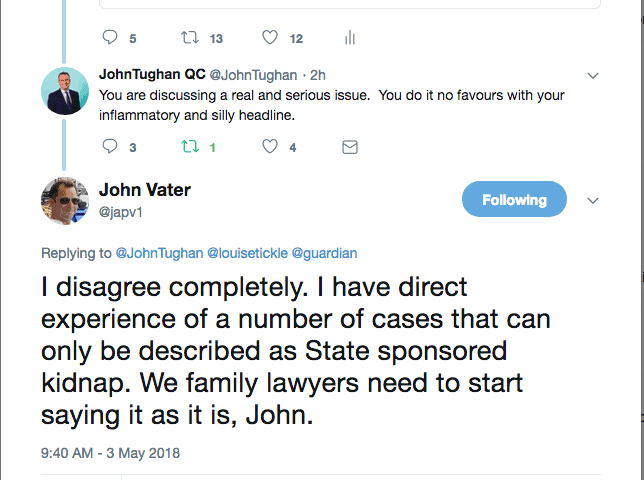 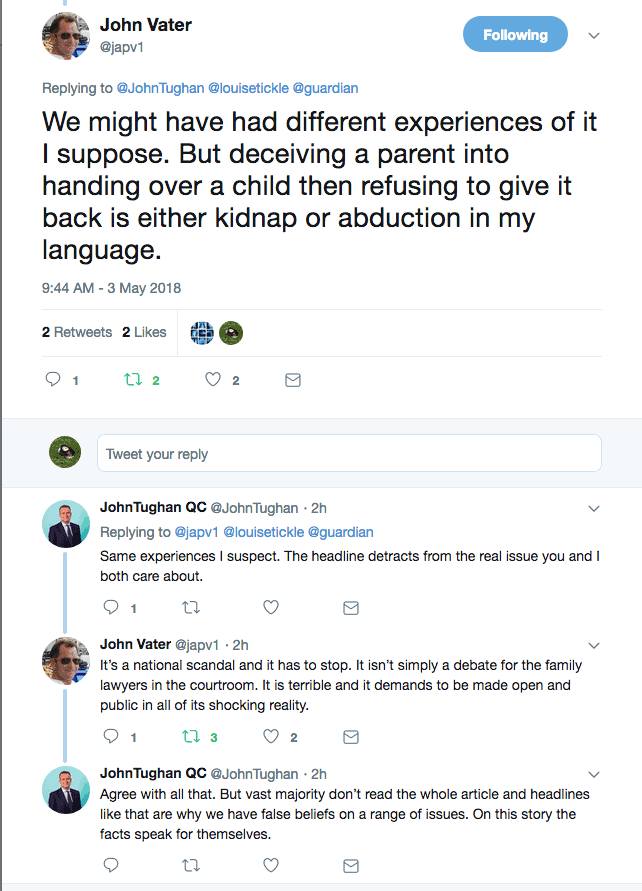 Some raised concern about demonisation of social workers. 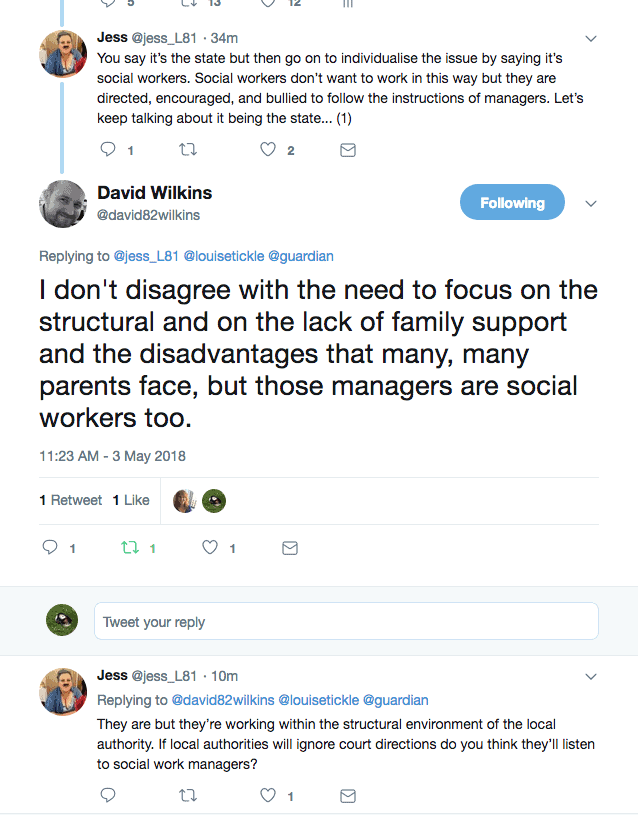 Sophie Ayers (social worker) thread of tweets setting out her concerns encapsulates many of the concerns raised. You can read that here.

Louise, I am really surprised to see such an emotive title.I thought, 'no worries, it is probably click bait".But,no. The destructive narrative continued throughout the article.I have no doubt that ''section 20' is misused throughout the country. I agree that this is a valid

Social work tutor wrote an emotive post which didn’t mention Louise’s article but opined that he had never kidnapped a child, and appeared to assert moral rightness in the face of dangerous parents.
Not everyone was persuaded that openness was the answer, as Louise has suggested. But Louise’s response below poses a really difficult conundrum. 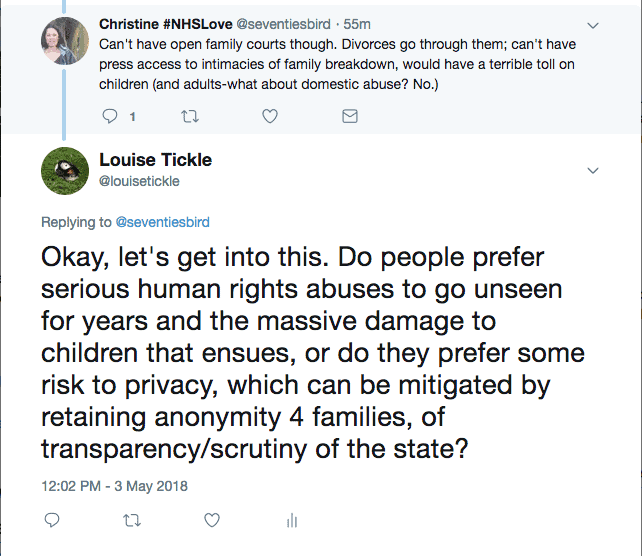 This is certainly about defensiveness and the proper role of journalism.
…I think there is also a reason to talk about structural context and who and how ensures that we don’t only hear the negative and about who is truly accountable so as to effect real change…
Whose responsibility it is to counter the tendency of the press to expose what isn’t working. It’s not the Press’ job to present what is working. But it probably is someone’s. And what would that look like…

One partial answer to that question about telling the positive stories too, is a small but important “Coda” judgment published yesterday by Sir James Munby, President of the Family Division. Sir James has published five earlier judgments in X’s case. X was a mentally unwell teenager who was at risk of death as a result of self harm. In one of his earlier judgments in desperation at the failure of the state to provide facilities to keep X safe, he too used the sort of shocking language we are more used to seeing in headlines :

If when in eleven days’ time she is released from ZX, we, the system, society, the State, are unable to provide X with the supportive and safe placement she so desperately needs, and if, in consequence, she is enabled to make another attempt on her life, then I can only say, with bleak emphasis: we will have blood on our hands.

In yesterday’s sixth judgment, we are told that X is doing phenomenally well and has gone back home. A happy ending, but Sir James concludes :

I cannot help wondering where X would be today if she had not, in the nick of time, received the appropriate clinical assistance she so desperately needed. That said, I leave it to others to ponder the moral of this story.

Not all cases are as extreme as X’s, but what would have happened to X if no less a person than the President of the Family Division had used shocking language to generate media attention and eventually action that possibly saved X from a sad end? And what will happen to children in the care of local authorities like Herefordshire if those local authorities continue to think it’s ok to unlawfully keep children away from their families?
It will be interesting to see if the coverage of the happy ending in X’s case is given as much coverage as the earlier part of the story, but one view is that to bemoan a failure to report such things is to misunderstand the role of journalism, and the economic realities of the mainstream media industry.
We would be very happy to host guest posts in response to Louise’s article, or which engage with the issues it raises. Unlike articles on newspaper websites, we do not impose a word limit. Please email info@transparencyproject.org.uk.
Lucy Reed @familoo
Feature pic : by David on Flickr (shows trash people by HA Schult) (Creative Commons – thanks)