‘Mediation’: A BBC Radio 4 legal drama about an inheritance dispute 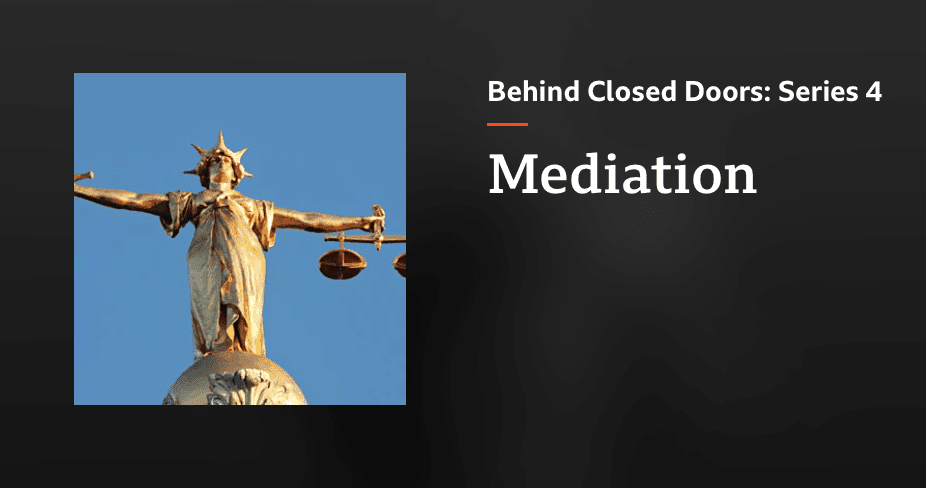 This is a first post from new writer Elizabeth Wark. Elizabeth is a barrister at 3 Doctor Johnston’s Buildings where she specialises in civil and family law. Before training as a barrister, she was a registered nurse in Australia and completed a training programme in intensive care nursing.

This is a Review of ‘Mediation’, Episode 4 of the Behind Closed Doors Series, broadcast on BBC Radio 4 on Thursday 16 January.  This five part legal drama series, broadcast from 13-17 January 2020, was written by Clara Glynn, and produced by BBC Scotland.

When Parkinson’s Disease sufferer 76 year old Julian Armstrong died, he left his house, which formed the bulk of his estate, to a 22 year old dog walker, Hope. Maude and Martin, his adult children, are left furious. The central questions are who should stand to inherit and what should they get?

In this episode, we are introduced to Maude, Martin and Hope.

Maude, divorced and childless, gave up her job as a teacher five years ago and returned to the old family home in a quiet village to perform the role of Julian’s live in carer. Older brother, Martin, also childless, is an entitled, successful career man who regularly interjects during the mediation with acerbic comments.

Hope is 22 years old and already mother to baby ‘JJ’. She lives with her own mother and father. Hope is a straight talking, unashamedly self-interested young woman of a working class background who had been Julian’s £10/hour dog walker for three and a half years. It seems Julian and Hope enjoyed each other’s company and often talked after the dog walking was done.  Unusually for the 21st century, Hope has firm ambitions to become a farrier.

Julian prepared a second will not long before he died without the knowledge of Maude and Martin, albeit whilst compos mentis (of sound mind) and with the help of his usual solicitor. Upon his death, Julian bequeathed the old family home, worth £300,000 to Hope from his estate of £390,000. He chose to leave it to Hope as an act of benevolence in order to support her career ambitions.

Over the course of the episode, the complex, fraught dynamic between the three main players is explored in the context of mediation. Despite their polarised views, they are drawn to the benefits of mediation over litigation. The mediator, Rebecca, highlights the neutrality, cost effectiveness, flexibility and confidentiality of the mediation process, wherein the parties are not bound to follow any code or apply any rule of law.

The mediation process comprised three stages. First was the initial plenary session. Here, tensions were running high and the party’s positions were seemingly entrenched. Second, the individual sessions, during which each party had the opportunity to privately discuss with Rebecca their own unique perspective on the situation and what their desired outcome was. Third, the final plenary session, where all gathered together again and potential solutions were formulated.

It is useful to compare this approach against the approach of the courts in the litigation setting.

Under S.1 of the Inheritance (Provision for Family and Dependents) Act 1975 both Maude and Martin, as natural children of Julian, may apply to the court for an order. By way of example, other possible classes of applicant include the current or former spouse of the deceased (if the latter, they remain eligible so long as they have not formed a subsequent marriage or civil partnership), and any person who immediately before the death of the deceased was being maintained, either wholly or partly by them.

In the foreword to the fourth edition of Sidney Ross’ book ‘Inheritance Act Claims’, Henderson LJ notes “It is, indeed, a striking feature of the 1975 Act that, in a given factual situation, there is often room for a wide divergence of legitimate views about the value judgments which have to be made under the Act”. Owing to this divergence of legitimate views, and therefore divergence of possible outcomes, there are inherent difficulties providing firm advice to clients on prospects of success.

This sentiment is expressed by Rebecca during the episode. Rebecca explains to Maude and Martin that to litigate their claim, rather than come to an agreed settlement, they run the risk of achieving little. A judge could determine either that the test is not satisfied or, alternatively, that although the test is satisfied, the order needed to remedy the failure of the deceased to make reasonable provision is only a relatively modest adjustment of how the deceased’s estate is to be divided.

Further, if Maude and/or Martin’s court action is unsuccessful, there may be costs consequences. The starting point in civil litigation is that costs follow the event (CPR 44.3(2)(a)), although the court has a discretion to make a different order (CPR 44.3(2)(b)). In contentious probate disputes, there are two long established exceptions to the general rule, which allow costs to be drawn from the deceased’s estate; if the litigation has been caused by the conduct of the deceased and where the circumstances afford reasonable grounds for investigation. However, it remains for Maude and/or Martin to make a positive case that they should not bear costs and displace the general rule.

Disputes such as these expose common human frailties and foibles. The full spectrum of emotions are on display; jealousy, anger, hurt, greed, frustration and ambivalence. For this reason they are readily accessible to the public and often feature in the press.

In focus just last week was the final will of Lord Sydney Templeman, a retired Law Lord dated 2008. Under the terms of that will, he left a property in Devon, valued in the region of £550,000, to his step daughters. This was in contrast to an earlier will, dated 2001 to which a codicil, dated 2004, was attached, which had the effect of leaving the residue of his estate, including the property, to “my family by my first wife”, a class which included his son, Michael Templeman. Mr Templeman now challenges the validity of his father’s final will on the basis that he lacked testamentary capacity.

This episode about mediation in the context of a disputed will is engaging, current, believable and thought provoking. It successfully portrays the individual characters in a realistic and genuine way. Further, it acts as a subtle educative tool for the lay listener who will learn much about the advantages and the process of mediation in such a situation.