Hang on a minute, don’t we need to hear from adults adopted as children, if we really want child-centred adoption policy and practice? 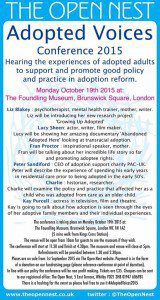 It gave a platform to the voices of some adults who were adopted as children; just at the moment that adoption agencies across England and Wales are filling media channels with a narrow, punchy message that children need more adopters to come forward quickly (particularly those over 4 years old for whom it is harder to find families).

First briefly on the theme of National Adoption Week: ‘Too old at 4?’

There is of course nothing wrong (and everything right) with a recruitment drive for adoptive parents for older children if this is what is needed. There’s also nothing wrong with making that message simple, emotive and direct for maximum impact.

But see Sally Donovan in Community Care yesterday The Great Adoption Mismatch for why the answer to secure permanence for those children who are ‘waiting’ in the system may not be just recruiting more adopters after all. And see ‘everywhere’ this week for adverts for adopters, for the most part not even mentioning the extra resilience, capacity and support likely to be required to meet the needs of most of these children.

See also When it comes to Adoption Reform are good intentions enough? in Community Care on the wider question of why so much priority and so much of the adoption reform fund are going to adopter recruitment by contrast to hard adoption support on the ground for children and families.

And so onto the Adopted Voices Conference itself

One of the things the Conference tried to do was look at barriers that might be preventing the voices of a wide range of adults, adopted as children,  informing adoption research and policy.

Compared with other adults involved in the adoption system – adopters, prospective adopters and professionals, adult adoptees say their voices are almost absent.

“There is no independent adult adoptee on any of the expert boards driving the changes” says Amanda Boorman, Director of the Open Nest, writing in Community Care, When it comes to adoption reform are good intentions enough?

Just how child-centred can an adoption reform programme (or its under-pinning research) be, without taking account of the voices of adults adopted as children, the Conference asked? That does seem a reasonable question.

By contrast, the Conference allowed the lived experience of adult adoptees to be heard, as part of a wider aim of promoting good practice and policy in adoption reform.

The experiences were compelling, powerful and deeply personal. They simply could not have been told without significant courage as well as generosity on the part of those who shared them.

To give a tiny snap-shot of the range and relevance for adoption policy, we heard about:

The central importance of child-centred decision making and listening to children (or not), was apparent in each profoundly different experience.

The Conference also launched research to gather the experiences of a much larger group of adopted adults, including on identity. The research is called ‘Growing Up Adopted’ and more information is available to all adopted adults at: growingupadopted@gmail.com

The Q&A also revealed some interesting views of adoption social workers on difficulties they are regularly experiencing on the ground for children – including problems with adoption agencies  routinely letting letterbox contact lapse; and the challenges of current law and practice on imposing requirements on adopters about contact, let alone enforcing them.

The Conference seemed to me to stand in solidarity with some whose lived experience jars uncomfortably at times with government adoption rhetoric, as played out through state funded adoption agencies – at a time when that may feel particularly acute: ‘National Adoption Week’. And I was happy to be part of that.