Drive-thru Divorce comes to the UK 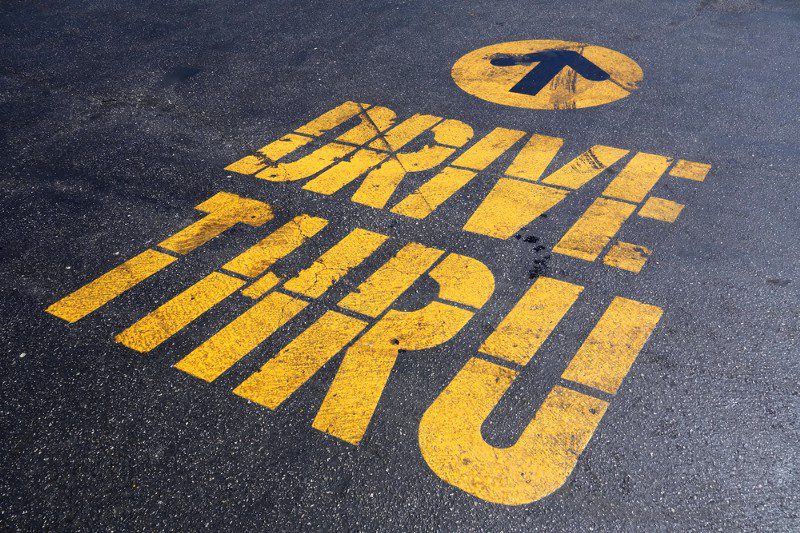 Most of us will have heard of the Las Vegas style drive-thru wedding. Now an English law firm is offering clients a drive-thru divorce, among its other more conventional legal services.

The Croydon law firm may be the first of its kind in Europe. Having moved into premises previously occupied by a roadside fast food restaurant, Burgher, Bunn & de Fries LLP decided to keep the drive-thru window as a talking point.

‘We thought it might work as a bit of a publicity stunt at first,’ says founding partner Tony Burgher, ‘but then business really began to accelerate.’

He admits that the beeping noise made by impatient clients at the drive-through window could have the effect of putting off more sensitive customers in the waiting area or conference room, and that it disturbs some of the lawyers trying to work in a more traditional desk-based environment. But Tony likes the idea of sitting at the open window overlooking the drive-in forecourt and waiting for new business to roll in on four wheels. ‘We like our clients to be keen — we’re not afraid of urgent applications. We serve them all the time. Sometimes we even supersize them.’

The service works like this. The client draws up at the window and explains that they want a divorce. The lawyer asks a few basic questions and then hands out a computer tablet on which the client completes a short online questionnaire. They then use the tablet to scan their wedding certificate and any other relevant documentation on their lap, trying not to photograph their knees in the process. To comply with the SRA ‘know your customer’ regulations they must also scan their passport and a recent household bill, and sign a standard Retainer form and Client Care Pack. Within minutes, the lawyer sets up a video linked ‘decree nisi hearing’ with one of the available Online Judges. They use the webcam at the window and watch the judge on the screen. Other parties can join the session from a remote location. The court order is circulated by email. The whole process can take less than thirty minutes, with a bit of practice.

The firm also handles wills, probate, conveyancing and all the other usual high street client business. ‘We don’t normally do crime’, said Burgher, ‘but it would churlish of us to refuse to act in road traffic cases, and we get quite a few of those. Sometimes the blue light is still flashing behind them as they pull up at the window.’

He told reporters that Burgher was indeed his real name and he had a cousin called Bunn, whom he hired as a paralegal, but he admitted he had added de Fries as a ‘bit of a side order’. The firm’s motto, per fenestra ad astra, says it all, if you’ll excuse my Latin.

Asked for their comment, the Law Society said they had no beef with Burgher but could not find the name Bunn on the Rolls. The Solicitors Regulation Authority (SRA) said that while there was no precedent for ‘drive through’ divorce, a so-called ‘quickie’ divorce was nothing more than an unopposed petition which you can do online from the comfort of your own home, via the brilliant new HMCTS online divorce portal, so why would you want to drive all the way to a disused junk food restaurant to do it?

Though the service is the first of its kind in Europe, readers will perhaps not be surprised to find that it has already been pioneered in the land of the free and open road. You thought we were joking? There’s one firm offering such a service in Salem, Oregon, according to UPI, and another called MyLegal Champion which has made a YouTube video about its drive-thru service. (It also offers drive-thru ‘bankruptcy barista’ service, with a free coffee. What’s not to love?)