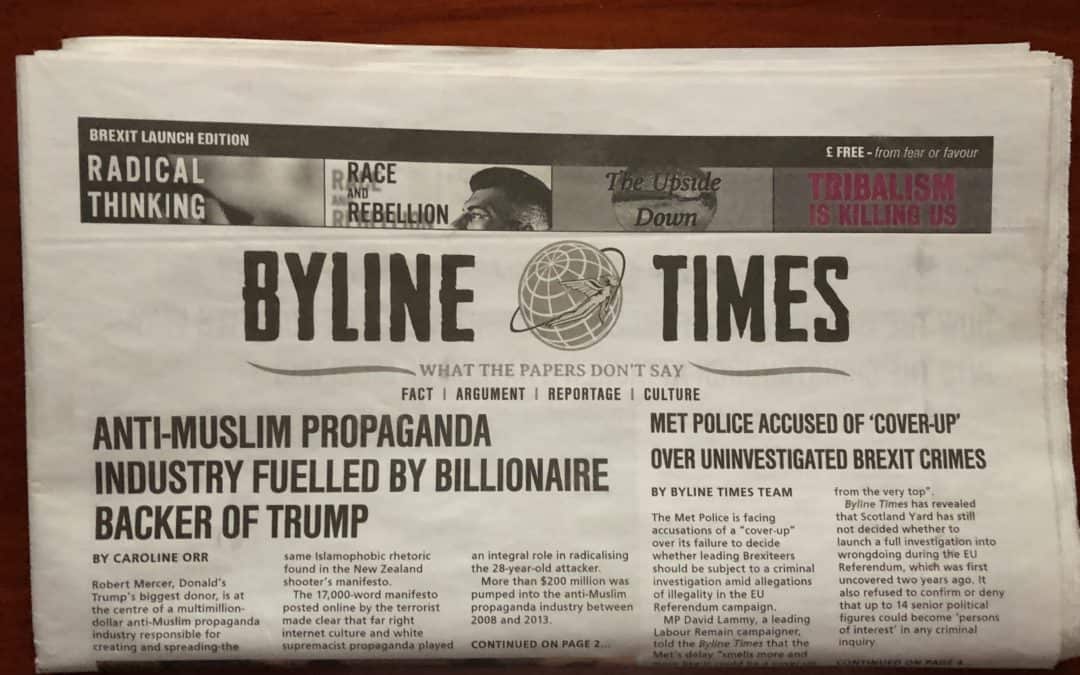 Having been developed as an online journal, Byline Times has now launched itself into the physical newspaper world with a special Brexit Edition. They say:

‘Now seems like a good time to launch a new newspaper – but not for the reasons many expect.

Brexit hasn’t just exposed the weakness of our political system, but also the lack of effective journalism to hold it to account.’

In terms of format, the paper is quite traditional, being tabloid in size and printed mainly in black and white, with some colour images. What is different is its manifesto, as one might call it.

‘Byline Times does not intend to report the daily news cycle. That’s for others. Our aim is to concentrate on ‘what the papers don’t say’. The heart of our paper will follow investigations. We will follow the story wherever it goes, without fear or favour. No PR company, advertiser or press baron can influence the stories we choose. Our integrity comes from our editorial independence.’

Behind this philosophy lies a short history of recent media regulation, or the want of it.

Appropriately enough, copies of this first edition were distributed at the launch event for Discover Leveson, a website resource developed at Kingston University’s journalism school, to make available to researchers all the evidence and publications of the Inquiry into the culture, practices and ethics of the press chaired by Sir Brian Leveson in 2011-12. (We write about this in a separate post.) The inquiry and the subsequent establishment of a new press regulator, IMPRESS, were prompted by widespread revulsion against the behaviour of some traditional tabloid newspapers, the subject of an effective campaign by the Hacked Off group. The traditional press have not signed up to IMPRESS, preferring the cosy self-regulation model of a revamped Press Complaints Commission, under the new name and management of IPSO (Independent Press Standards Organisation) but applying the same Editors’ Code as before, drawn up and policed by mainly media insiders. The state of journalism in this country in a more general sense has been reviewed and reported on in The Cairncross Review. And just last week the Media Reform Coalition issued an updated report on Who Owns the Media, demonstrating the concentration of ownership of the majority of the national and regional newspapers, and online news delivery channels, in the hands of a small number of big corporations.

Against that background, and prompted by the activism of many of the same figures as the Hacked Off campaign, Byline Times offers a fresh model of independence from both media mogul ownership and the government. It is regulated by IMPRESS. It features journalism challenging the influence on politics of extreme ideologies and obscurely funded lobby groups and think tanks. It is a brave venture because it is hard to see how such an enterprise can hope to run on profitable lines, without either wealthy backers or (at the moment) many advertisers. But that may change. The funding model is based on subscriptions and various forms of membership. If the circulation rises, the advertising will do too.

What about the content? There are political articles about far right activists and billionaire backers of Trump fuelling anti-Muslim propaganda in the UK and US, about the failure of the Metropolitan police to investigate misconduct in the Brexit referendum, about leading figures in the Leave campaign and their agenda, and about racism and identity politics. There are law stories about miscarriages of justice (we’ve commented on one of them elsewhere), legal aid, the prison and probation services, and drug legislation, and foreign political stories about Putin and the Ukraine, the US elections and the abuse of the freeport system. There are also some arty/cultural stories, such as Alexei Sayle’s on why football managers should read Aristotle and understand the ancient concept of catharsis, and about mycology (The Magic and Mystery of ‘Shrooms’) and how to game the Oscar system with a formulaic film.

It is unlikely anyone would think this collection of material could by itself displace reading the Times or the Guardian or watching the news on Channel 4 or the BBC. And that is not their stated aim, which is rather to provide context and background to the daily news round, and perhaps lift the veil on some of the more sinister activities that would otherwise remain hidden behind the main news stories of the day. In that sense it is a bit like the New European, another new contender in the crowded market, which has nevertheless established itself with some pertinent reporting and memorable cover images; or even Tortoise (which we’ll be writing about soon).

Byline in print could benefit from some livelier graphics, perhaps a cartoon or three, and a better typeface (it’s not clear why it is different from the one on the website, which has a pleasing 17th century radical pamphleteer feel to it). It might also draw more from the wider team of reporters online. But it has a distinct character and a look and feel of its own, and the printed version is really only a sample of the much richer range of content available on the website.

Hugh: not hacked off.