On the 22nd of November, The Transparency Project facilitated a panel discussion at Gresham College to ask the question : Allegations of domestic abuse – are family courts working for children & families?

Our thanks go to the fantastic panel, volunteers and chair who gave their time to make this a vibrant event – and to our coordinators Alice and Annie. Big thanks also go to those who support these events financially, namely the Legal Education Foundation and sponsors Bloomsbury Professional Family Law.

The video of the event has been uploaded to YouTube and can be viewed below:

Barnard’s Hall was full and we had great levels of audience participation. Contributions came across the spectrum of views and experiences.

The panel too was drawn from a broad cross section : chaired by journalist and Transparency Project member Louise Tickle, panelists spanned the judiciary (Mr Justice Keehan), CAFCASS (Sarah Parsons), the bar (Sam King QC), support organisations (Olive Craig Rights of Women and Bob Greig Only Dads / Only Mums) and psychology (Dr Freda Gardner). Each made valuable and frank contributions – the point of consensus as between panelists and audience members of all backgrounds seemed to be that the system was struggling due to lack of resources, and that sadly without additional resources there were limits on what improvements might be made. There were many calls throughout the evening for the partial or complete reinstatement of legal aid. Overall, the room seemed to hold the collective view that (for probably varying reasons) the answer to the debate question was ‘No’ (or at least ‘Not completely’).

Credit must go to everyone involved for the fact that almost two hours of debate on this difficult and emotive topic was challenging but respectful.

After launching the guidance note itself and introducing the panel, the chair opened the event to questions from the floor :

Move to questions from the floor. Audience member; what has prompted CAFCASS change to a harder line in acceptance of concept of parental alienation? SP takes issue with 'harder line'. Child Impact Assessment Framework sets out definition of PA #TPtalksDA

Sarah Parsons rebutted that suggestion – there was no ‘harder line’ in respect of parental alienation. She said that the focus was on the individual child’s experience and through the new Child Impact Assessment Framework practitioners were encouraged to consider all potential forms of harm. After a further question about alienation the debate moved back onto the main topic at hand.

We’ve highlighted below a few key themes that emerged – but much more detail can be found by looking at the live tweeting on the night from the @seethrujustice twitter account and using the hashtag #TPtalksDA. As with other events we have facilitated the event was filmed and the video will be published on YouTube in due course for those who were unable to come.

Asked about levels of understanding of the long term impacts of coercive/emotional abuse, Mr Justice Keehan said that there was an increasing and growing awareness of this phenomenon, and whilst he acknowledged that more needs to be done to raise awareness he thought that the potential ongoing impact of coercive or controlling behaviour was now much more readily taken into account by judges when deciding whether to believe allegations. Sam King QC wondered whether the ‘5 incidents’ approach to domestic abuse allegations was apt to deal with cases of coercive and controlling behaviour.

Question directed to FG – 'it is imperative that expert witnesses remain independent and it is the duty of the court to ensure this – must be vigorously tested in court process. Mr Justice K – weight to be attached to that evidence would be nil. #TPTalksDA

Olive Craig made a plea for more preventative work – that was echoed by Dr Gardner who also said the system was letting perpetrators down. Perpetrators can be extraordinarily vulnerable people who need a lot of help said Gardner. They are sometimes victims themselves, and they go on to form other relationships so there is a need to address these issues. Many cases are intergenerational. FNF asked CAFCASS why they only commissioned perpetrators programmes for men, and Sarah Parsons was able to confirm that CAFCASS are in the process of commissioning programmes for female perpetrators.

Parent could benefit from resources if catalyst for change or removal of abuser. We should be far better placed to tolerate some risk and provide intervention (Audience applauded) – number of care apps up again 4% #TPtalksDA

Olive Craig warned that there are advice deserts in family law so that even where litigants were eligible for legal aid they couldn’t access it. Bob Greig and Sam King QC both called for a reinstatement of legal aid.

Whole family justice system is failing women and families. Rights of Women find it is horrific that people who should be eligible for legal aid cannot access legal aid solicitors – advice deserts across the country. #TPtalksDA

Dr Gardner wondered whether we might also need to think about whether litigants lack ‘emotional capacity’ (rather than cognitive capacity) to conduct proceedings as a result of the stresses of proceedings – and that a lack of such capacity might qualify a litigant for legal aid.

Whilst Families Need Fathers raised a challenge about a rise in non-molestation applications since LASPO (Legal Aid, Sentencing and Punishment of Offenders Act 2012) in particular regions, panelists and audience members challenged the conclusions that could properly be drawn from the available statistics (see our analysis of this : ‘Fathers’ group claims parents and lawyers fraudulently claim legal aid (again)’, Transparency Project blog 7 Nov 2018 and linked blog posts).

OC – but the increase in Non mols only takes it back to the level it was in 2009. No evidence of an increase in malicious applications. Important to challenge notion of increased false allegations #TPtalksDA

A number of panelists and audience members talked about the possibility of radical reform of the approach of family courts and the way in which domestic abuse specifically is handled, and a number of suggestions were made about potentially useful models abroad and within this jurisdiction (FDAC – Family Drug and Alcohol Courts) etc. There was enthusiasm for the idea of some sort of radical rethink, but discussion kept coming back to the lack of resources. We’ve seen a few frustrated tweets complaining that people left disappointed as the room was full of ideas without solutions – at The Transparency Project we see our role as one of facilitating debate about what happens, what works and what might change – it is for others to make that change happen. Talking is an essential first step in improving systems and improving confidence in them. 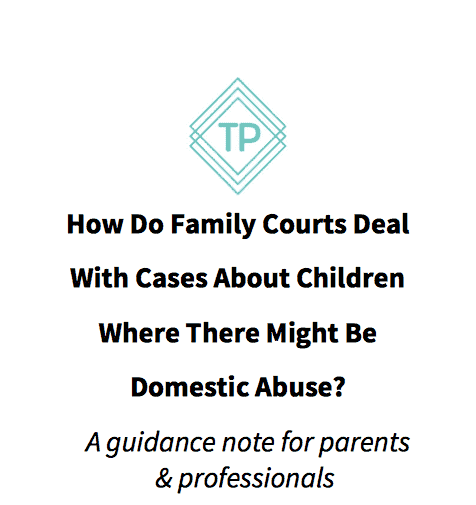 Do take a look at the Guidance Note that we launched at the event, which has received overwhelmingly positive feedback – we’ve had a few suggestions for corrections and minor edits so please do send anything you spot to us and we will consider revising for future print editions and the online / pdf version.